The lying leg curl (otherwise known as the hamstring curl) is one of the most effective isolation exercises for the hamstrings. If you are looking to add some strength and mass to your hamstrings, then this should be one of your go-to accessory exercises when training the posterior chain.

How to perform the lying leg curl:

The lying leg curl primarily activates the hamstrings, which comprise of the Biceps Femoris (long and short head), Semitendinosus and Semimembranosus. Since the Gastrocnemius (one of the main calf muscles) is bi-articular, meaning it crosses two joints – the ankle and the knee joint, it also plays a role in the knee flexion involved in the lying leg curl. With appropriate technical execution of this exercise, and the implementation of progressive overload (increasing volume load etc. incrementally across a number of training sessions), this exercise effectively trains a broad range of muscles in the posterior of your leg, leading to some very favourable training adaptations, such as strength, endurance and size.

With proper execution, focusing on controlling the movement and contracting your hamstrings hard during the concentric phase, this exercise can elicit a great deal of strength and size adaptations for the posterior chain. If you’re a powerlifter looking to increase your deadlift or a bodybuilder trying to build some bigger hamstrings, this exercise should be one of the staple exercises in your repertoire for the hamstrings.

It can help to address muscular imbalances

If you partake in a sport like weightlifting or if you enjoy movements such as squats, then you may have more developed quadriceps relative to your hamstrings. This can lead to injuries or other pathologies that may cause pain. Using the leg curl can help to specifically develop the strength and work capacity of the hamstrings, helping to balance out the strength ratio between the posterior and anterior chain.

If you are dealing with an injury that limits your ability to perform other exercises, such as lower back pain that is affecting your ability to perform a deadlift, then this exercise is the perfect solution to ensure your hamstrings still receive significant training stimuli. This can help to mitigate any muscle loss that may occur during cessation of large compounds such as deadlifts. Additionally, the leg curl can offer a safe and controlled method of loading the hamstrings during the later stages of rehabilitation from a hamstring strain.

It can contribute to athletic development

Many sports rely on the ability of the lower limb to produce muscular power, in which the hamstrings play a pivotal role, as they produce a lot of power for knee flexion and hip extension – both important when running. Training the hamstrings with an isolation exercise such as the leg curl can help to ensure the hamstrings receive the necessary stimuli to adapt and thus support other aspects of athleticism, including the execution of sports specific movements. 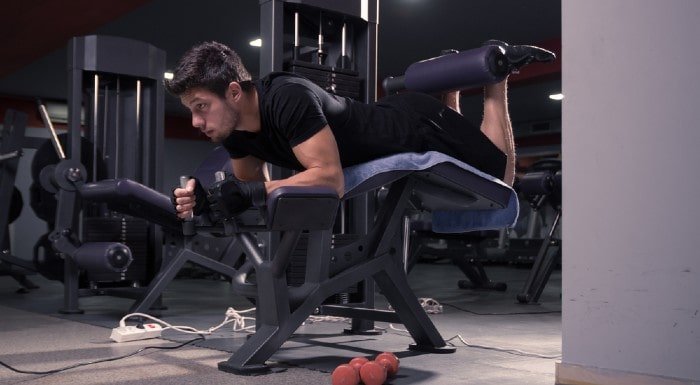 Other Variations of Leg Curls

Whether you’re working around an injury or seeking out other methods to progressively overload this movement, there are plenty of variations to choose from to facilitate the training adaptations that you desire.

This is essentially the same as the lying leg curl, although there is slightly less hip flexion involved – meaning the hamstrings are worked in a slightly different range of movement. This exercise is also performed unilaterally, as the opposite leg supports you to stay standing.

This is performed in the same way as the standing leg curl, but you can perform this variation anywhere you can take a resistance band!

When performing the standing version of this, you will likely be unable to effectively load the end range (closest to the glutes) of this exercise. The prone lying variation helps to bridge that gap.

This variation will place the greatest stretch on the hamstrings in the starting position, as the hip is flexed to around 90-degrees or more with the knee fully extended. It would definitely be beneficial to use this variation along with the lying leg curl, as they load the hamstrings at different lengths.

This variation relies on overloading the eccentric portion of the leg curl, which research has shown increases strength and fascicle length – two key factors that protect the hamstrings from injury during high eccentric loading (such as sprinting).

Common Mistakes and How to Fix Them

Using loads that are too heavy can result in you performing the exercise with incorrect technique to grind the rep out and get the load up, while using loads that are too light will not elicit sufficient training stimuli that result in positive training adaptations. With the correct load, you will be able to perform every rep with the correct technique, but you should fail (i.e. be physically unable to contract the muscle) within the desired rep range.

Rushing the eccentric phase of a repetition mitigates the time under tension, a driving factor for hypertrophy. Subsequently, this will limit the amount of training adaptations made, so ensuring you control the full rep is essential when you’re trying to make the desired training adaptations.

The lying leg curl provides a great exercise for directly stimulating the hamstrings, which can ultimately contribute to a more rounded physique and enhanced athleticism. You should consider this exercise to be an essential accessory when training your legs in the future!

Is Creatine Right For You? | Quiz

Cholesterol | What Is It? How To Lower Cholesterol?