Blog » Motivation » Vegan Hotspots: Where in Australia can be crowned as the country’s vegan capital?

It’s estimated that nearly 2.5 million Australians (that’s 12.1% of the population) have taken up a vegetarian diet, with around 500,000 going fully plant-based and embracing veganism.

Veganism is clearly on the up all around the world, with vegan alternatives popping up in more and more supermarkets and restaurant menus, with an estimated 8.7% of new products in Australia being labeled as vegan or having no animal products, all of which are constantly
improving in quality and taste.

As well as seeing more plant-based products on our shelves, you only have to look at the high street of any major town or city in Australia to see that there are far more vegan-friendly eateries and shops than there were even a few years ago, and even fast-food giants such as Maccas
and Hungry Jack’s are launching vegan options, all of which make it easier than ever to ditch animal products from your diet.

But where in Australia can claim to be the country’s vegan hotspots? To find out, we’ve ranked the country’s 20 biggest cities on the number of vegan restaurants, cafes and health food shops (per person), as well as related web traffic and search volume. 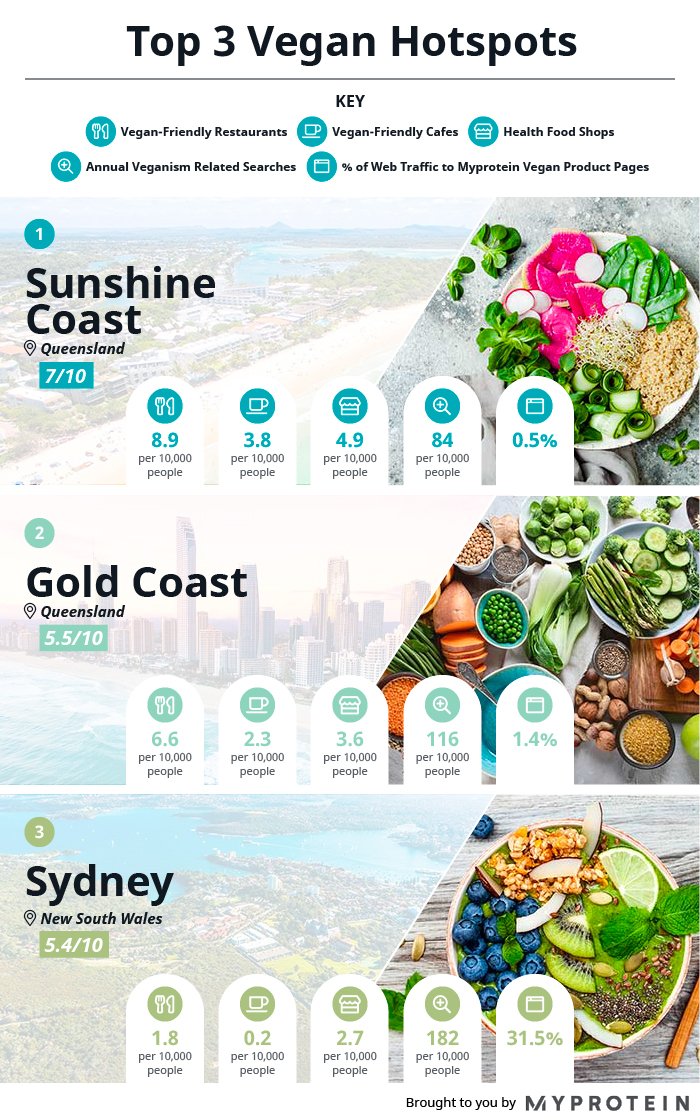 When we look at the rate per person of vegan-friendly establishments, it’s one of Australia’s capital cities that comes out top, but Queensland’s Sunshine Coast, with 305 restaurants, 128 cafes and 167 organic health food shops in an area of just under 350,000 people.

Just the other side of Brisbane, Queensland’s Gold Coast came in second place, and much like the Sunshine Coast boasts high numbers of vegan-friendly establishments (per person), with more arriving all the time, as well as a relatively high number of residents turning to Google to learn more about veganism (116 per 10,000 people).

It’s no surprise to see the country’s biggest city in the top three vegan hotspots, with a thriving vegan community.

Without normalising the data by population, Sydney is by far the city with the most vegan establishments, but even scores highly when you take into account the fact that it is home to around 5 million people too.

Below, we’ve ranked each of Australia’s 20 biggest cities to find out which are the best to live in (or visit) as a vegan. Outside of the top three, while some of the nation’s state capitals such as Melbourne (5th) and Brisbane (7th) fared well, others such as Perth (17th) were surprisingly
lacking in vegan-friendly options.

Australia’s Vegan-Friendly Restaurant Capital – Sunshine Coast
With 305 vegan-friendly restaurants across an area with a population of just 341,000 (which works out as 8.9 per 10,000 people, Queensland’s Sunshine Coast boasts the highest concentration of vegan restaurants of any of the country’s biggest cities, such as Elixiba, Gopal’s and Lemon and Thyme.

Australia’s Vegan-Friendly Cafe Capital – Sunshine Coast
Again, it was the Sunshine Coast that came out on top when it came to vegan-friendly cafes, with 3.8 per 10,000 people, or 128 overall, showing why it deserves its title as the nation’s number one vegan hotspot.

Australia’s Health Food Shop Capital – Sunshine Coast
No surprise for guessing that the Sunshine Coast once again came out as the city with the most health food shops per person (4.9 per 10,000 people), but it’s also interesting to note that smaller cities such as Bendigo (4.7) and Albury – Wodonga (4.7) took second and third place.

City with the Most Vegan-Related Searches – Sydney
When it came to which cities had the most people curious to learn more about being a vegan, it became clear that the country’s bigger cities definitely have the highest concentrations of vegans, with Sydney, Melbourne, and Brisbane searching for vegan-related queries the most.

City with the Most Interest in Vegan Products – Sydney
Looking into our own data further revealed that while some smaller cities such as the Sunshine Coast may have excellent vegan options available, ultimately the largest numbers of vegans still reside in the country’s major cities, as you would expect, with over three-quarters of traffic to our vegan product pages coming from either Sydney, Melbourne or Brisbane.

We gave each of Australia’s 20 biggest cities a normalised score out of ten on each of the following factors, before taking an average score for each city (population data was sourced from the Australian Bureau of Statistics’ population estimates by Significant Urban Area, 2009 to
2019.

Annual Veganism Related Searches (per 10,000 people)
The number of Google searches made between September 2019 and August 2020 for
‘veganism’ and related terms, sourced from Google Ads’ Keyword Planner.

% of Web Traffic to MyProtein Vegan Product Pages
The percentage of traffic participation by Australia’s cities and regions on our vegan product
pages over the past twelve months.

How To Maximise Your Gym Session

Everything You Need to Know About Your Glutes

The Best 15 Core Exercises From Home or Gym

How To Get A Smaller, Slimmer Waist | Top 5 Exercises