The hamstrings are an essential part of the posterior chain and are comprised of three different muscles;

From a functional perspective, the aforementioned muscles flex the knee joint, however all of them except the biceps femoris extend at the hip joint.

The following passage will overview the Romanian deadlift or ‘RDL’ as it is commonly referred to.

Before starting an exercise guide on how to perform them, lets briefly look at what benefits we can expect to reap from the exercise itself;

Combining many muscles in one movement will lead to a greater hormone release, CNS stimulation as well as overall calorie burn.

The muscles incorporated in the RDL are also largely applied to compound movements such as the Barbell Back Squat, The Deadlift and variations of the both of these. Developing the RDL exercise will also in turn benefit the squat and deadlift.

Often, during hip extending movements such as the squat, lunge, leg press and front squat, the quads get the majority of the stimulation and as a result – the hamstrings do not. This can result in what is known as a muscular imbalance and can lead to a hamstring tear.

Hamstrings are one of those most commonly injured muscle groups in sport today so for this reason alone, we should train, stimulate and emphasise them sufficiently.

Due to the activation and stabilisation of the hip muscles during the RDL, day-to-day activities that heavily involve the hip joint such as walking, running and skipping are all made far more easy and facilitated.

The focus on the hip hinge is certainly one advantage that the RDL carries over the conventional deadlift; the hip hinge is essential not only for daily functionality but also athletic performance and therefore should be considered by any athletes of any level.

Having looked at the benefits of the RDL, now lets take a brief assessment on how to perform the exercise

1) With feet slightly narrower than hip width apart, keep your back straight, look forward and slowly bend down to grip the barbell. Ensure the grip pronated (overhand). Supinated grip is upwards and pronated is facing the ground.

With a slight bend in the knee and shoulders pinned right back, mentally visualise the muscle that you are about to stimulate; the hamstrings.

2) Gradually lower the barbell by sticking your backside out as far as physically possible, ensure that you are lowering the bar as much as you can without hurting your back but also feeling the muscle stretch. As an indicator, the barbell should be lowered below your knees as a bare minimum.

Throughout the movement; keep the slight bend in the knees, the barbell close to you at all times and look forward without compensating any neck strain preferably. Additionally, during the lowering phase you should be inhaling your breath as much as possible.

3) Once you get as low as you physically can, powerfully exert your breath and assertively drive the hips forwards; activating the hip hinge – therefore allowing you stand back upright.

4) Repeat this sequence of motions.

? Locking out the legs

Completely locking out the legs during this movement will result in less hamstring engagement, alongside potential injury and back tension.

To prevent this, ensure there is a slight bend in your knees, so much so that you can complete the full range of motion whilst getting a good stretch.

Both the RDL and the conventional deadlift place severe risk on your lower back and for this reason, it should be noted that a slight arch in the back should be maintained at all times whilst not allowing it to ‘round’.

This will maximally compress the front discs of the spine and due to this; the more the lower back is rounded, the greater the compression of the discs.

? Not a full range of motion

With some exercises, quite a few actually, you can get away with a not performing the full range of motion as long as your applied muscles are under tension some way or another. In order to fully attain the benefits of the RDL then the barbell or dumbbell (whichever is being used) must be going as low as possible so ensure a full hamstring stretch.

In order to achieve this range of motion, perhaps lower the current weight you’re using or develop your hamstring, lower back flexibility and hip flexors in isolation. 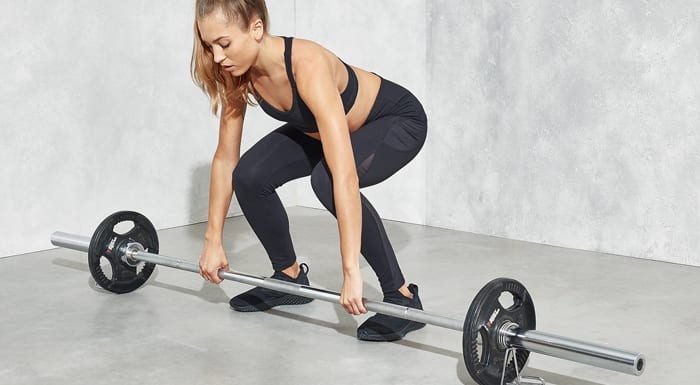 As previously mentioned; due to quad dominance, the hamstrings can become an imbalance and become injured easily. Statistics have shown that the hamstring strain is one of the most common injuries in sports that involve top speed levels and kicking motions.

Often, when we try to combine hamstrings and quads in one session; one of the muscle groups may either get ignored or not become stimulated with the same training intensity due to fatigue.

In order to prevent this, try separating the two muscle groups into two different sessions and pair them with another muscle group that isn’t as large. Try combining quads/calves or quads/abs on one day and hamstrings/glutes or hamstrings/calves on the other.

Apply the priority principal and listen to your body!

In terms of training the hamstrings, the following exercises (and their variations) are typically applied to those looking to grow their hamstrings in tone, size and strength;

How to Build Muscle & Mass | Get To Your Goal

How To Prevent These 5 Common Running Injuries

Impact EAA — The Next Big Thing For Powerful Results

Keep Yourself In Peak Condition | Discover Our Myvitamins Range