YouTuber and Myprotein ambassador Stan Browney is arguably best known for his challenge videos. He takes normal people and puts them through a 90-day challenge, usually with impressive results. It’s no wonder how he got 2m YouTube subscribers.

Stan’s latest project is 18-year-old student Koos. He’s big, strong and tall. He’s also extremely nice and a little bit clumsy. Koos originally got super-fit during the Covid pandemic but has had ups and downs with his weight since.

Sensing an opportunity to work his magic, Stan hatched a plot to get Koos over to his place and challenged him to take on the 90-day programme. Koos accepted with barely a second’s hesitation.

Two years ago, Koos was inspired to start working out by one of Browney’s transformation videos. He started the 90-day challenge and got way fitter but didn’t keep it up. After a year of little exercise, he went on a seven-month bulk, gaining 23kg (50.7lb).

He began doing only bodyweight exercises but put on so much weight it became too difficult. He feels strong but constantly tired and is no way near as fit as he once was. Now he wants to change.

Aside from losing weight, Koos had a few other objectives. The first was to get better at bodyweight exercises. His original transformation was based predominantly on this form of exercise, but his weight gain had made it far more difficult to do.

Koos’s other and perhaps most important goal was to get fitter and feel healthier. He no longer wanted to struggle with cardio-based activity and be out of breath in seconds.

The Stats (day one)

Koos tracked his journey through self-recorded videos and recorded progress using an Apple watch given to him by Stan, who said he would be able to keep it if he met all his goals at the end of the challenge. He’d also be fuelled throughout by plenty of Myprotein goodies.

For the first nine days, Koos was absolutely killing it, completing all his workouts, eating his protein and burning his target calories. But after 10 days, he was beginning to feel a little run down. He tried to power through but quickly realised training when not feeling 100% isn’t the best idea. Sometimes you just need to listen to your body. After some advice from Stan, he decided to focus on recovering on day 11.

On day 12, feeling rested and ready to go again, he got back in the gym and hit a new PB — three reps of a 180kg deadlift.

Although the challenge was going mostly well — aside from a few bad workouts and days of illness — Koos didn’t get the numbers he hoped for by day 15. At the midpoint weigh-in, he was 111.9kg (246.7lb). But he still believed he’d hit the 108kg target by day 30, and his bodyweight strength was definitely improving.

But there were a few more snags to come. On day 22, after suffering an injury and generally feeling exhausted, Koos headed to Stan’s for a deep dive into what was going on. A quick look into the Apple watch stats revealed Koos was not getting proper rest. His sleep quality was only 57% — far from ideal. To fix things, Stan gave him an evening routine for the rest of the challenge in the hope it would help him wind down and get a better night’s sleep.

And just like that, it was already the 30-day check in. Koos had his fair share of obstacles over the course of the challenge. Poor sleep, a relentless schedule, injury and illness to name a few.

But the hurdles clearly didn’t stop him. Despite seemingly being unable to lose any weight 15 days in, on the 30th day he’d hit his goal of 108kg. 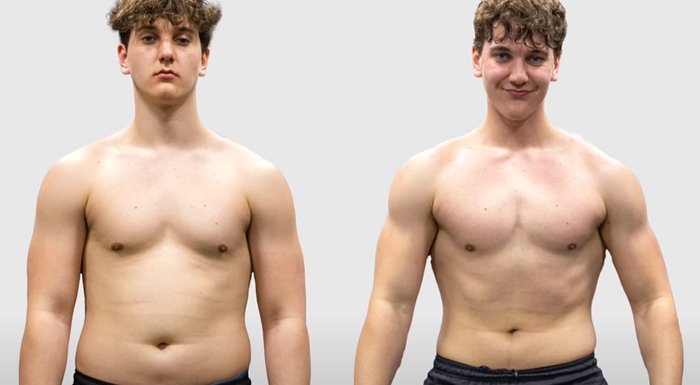 There we have it. Koos managed to maintain his muscular size for the most part while losing the weight he wanted. And his strength increased. His results after just 30 days are seriously impressive, and he’s more than on track to meet his 90-day challenge objectives.

If you needed help convincing yourself to do cardio...

PT Explains Why You Should Stop Chasing DOMS

And if you should train sore.

What Is Magnesium? | Health Benefits, Side Effects & Supplement Dosage |PART 1