One pastime and aspect of life that has grown exponentially in popularity during the last year is fitness. With lockdown giving people more time many have turned their attention to getting fitter and improving themselves.

Another thing that has enjoyed a rapid rise in popularity is the social video streaming platform TikTok. In fact, it was the third fastest-growing brand in the world in 2020 and is now estimated to have over 1 billion users around the globe.

With both these things booming at the minute it is hardly surprising that many people are marrying the two together and creating fitness-related content on TikTok. These new fitness influencers (or ‘Fit-fluencers’) have attracted many followers, with videos showing a multitude of different fitness trends that are very popular at the moment. 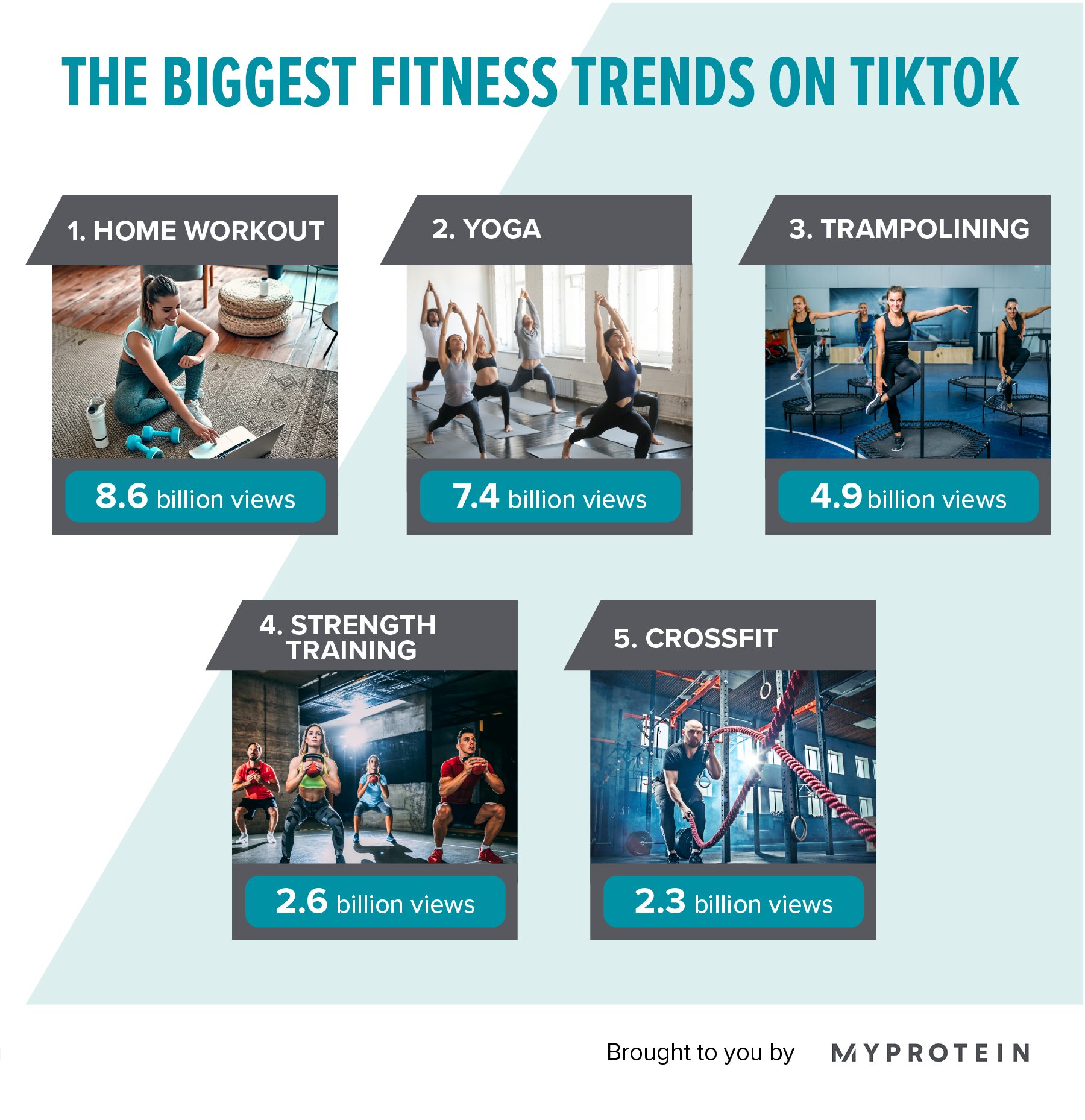 Home Workouts are the fitness trend with the most views on TikTok, as videos with this hashtag have been seen 8.6 billion times, which is almost 1 billion views more than its next nearest competitor. With lockdowns shutting gyms across the world, it is hardly surprising that many have been bringing their fitness routines into their homes.

Another aspect of life that people have taken a keener interest in recently is the importance of mental wellbeing and the dangers of an unhealthy mind. In the sports and fitness world, when British heavyweight boxing champion Tyson Fury detailed his struggles with depression, it went to show that being an elite athlete is no guarantee of mental wellbeing. Yoga has become increasingly popular as it helps you feel calm and lower stress levels while also building physical strength. Consequently, 7.4 billion people have viewed yoga related videos on TikTok.

The next highest-ranking fitness trend is trampolining, with 4.9 billion views for trampoline-related videos. As trampolining is a fitness routine often enjoyed by younger people, it is unsurprising it chimes with the younger demographic who use TikTok regularly. Although trampolining has racked up almost 5 billion views it is still some way behind the top two in terms of popularity.

This year there has been a general trend in the fitness community to move away from cardio style workouts and on to strength training. Using weights and building up muscle strength is big at the moment, and consequently, it is one of the biggest fitness trends on TikTok with 4.6 billion views.

Anyone who has taken part in CrossFit training will testify to the intensive fast nature of that style of workout, and the competitive nature has drawn many people to take it up in recent years. As CrossFit workouts cover a number of different fitness aspects there is something for everyone if you’re prepared to push yourself, and this popularity has clearly transferred to TikTok where CrossFit videos have been viewed 2.3 billion times. 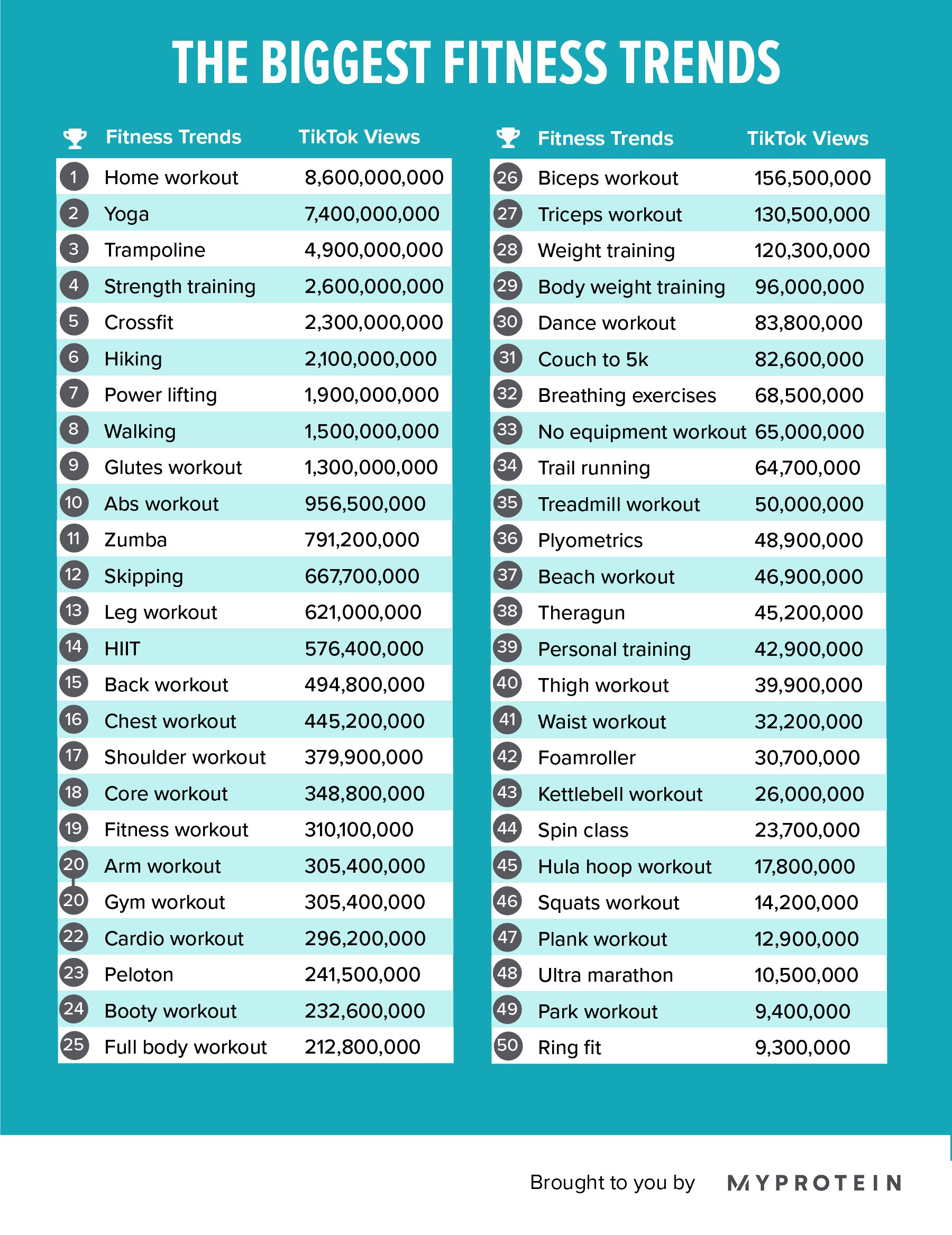 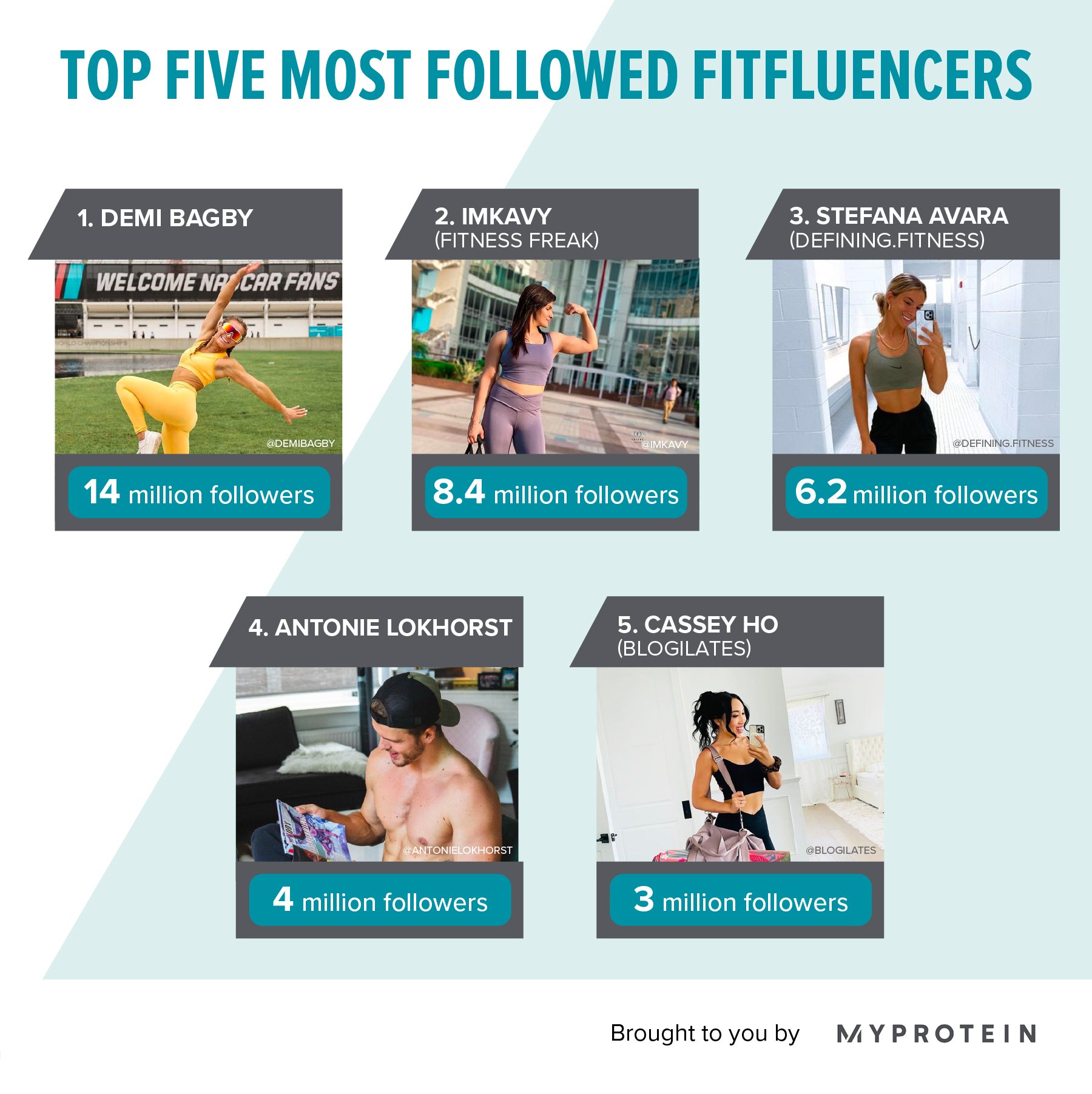 By far the most popular fit-fluencer in the world is Demi Bagby, her 14 million followers vastly outnumber her closest competitors and she is, therefore, the leading light in TikTok fitness influencers. The twenty-year-old bodybuilder has taken the social media site by storm, and her videos receive an average of 32,000 likes.

Also known as the Fitness Freak, Imkavy has the second-highest number of followers on TikTok with 8.4 million. This makes her the second most popular fit-fluencer on the platform by a distance, although she is still a long way off top spot.

The defining woman of TikTok fitness, Stefana Avara makes it a hat-trick of females at the top of the rankings. Avara started her social media presence whilst studying as a student at the University of Ohio, and her message is all based around body positivity through fitness.

Fourth in the rankings is Antonie Lokhorst with 4 million followers on TikTok, this makes him the most popular male fit-fluencer on the platform. Lokhorst loves smashing out press-ups and pull-ups in his videos, which attract an average of 8,589 likes per video.

The inventively named Blogilates is run by certified Pilates instructor Cassey Ho, the social media star who first made her name on YouTube but is now big in the TikTok world with 3 million followers. Along with the fitness videos on her channel Cassey mixes in videos around her daily life which gives her a wider audience. 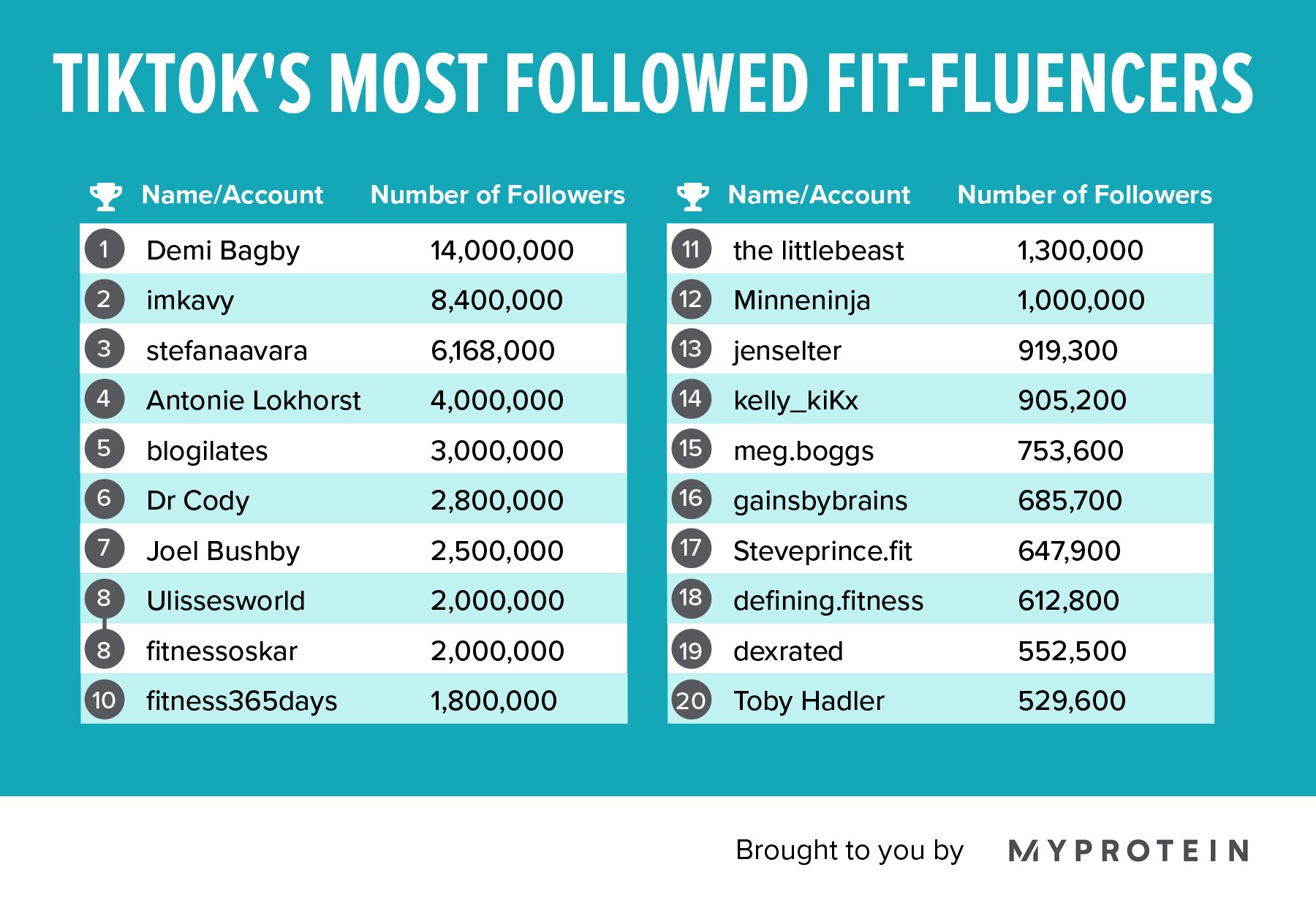 The Most Followed Australian Fit-fluencers 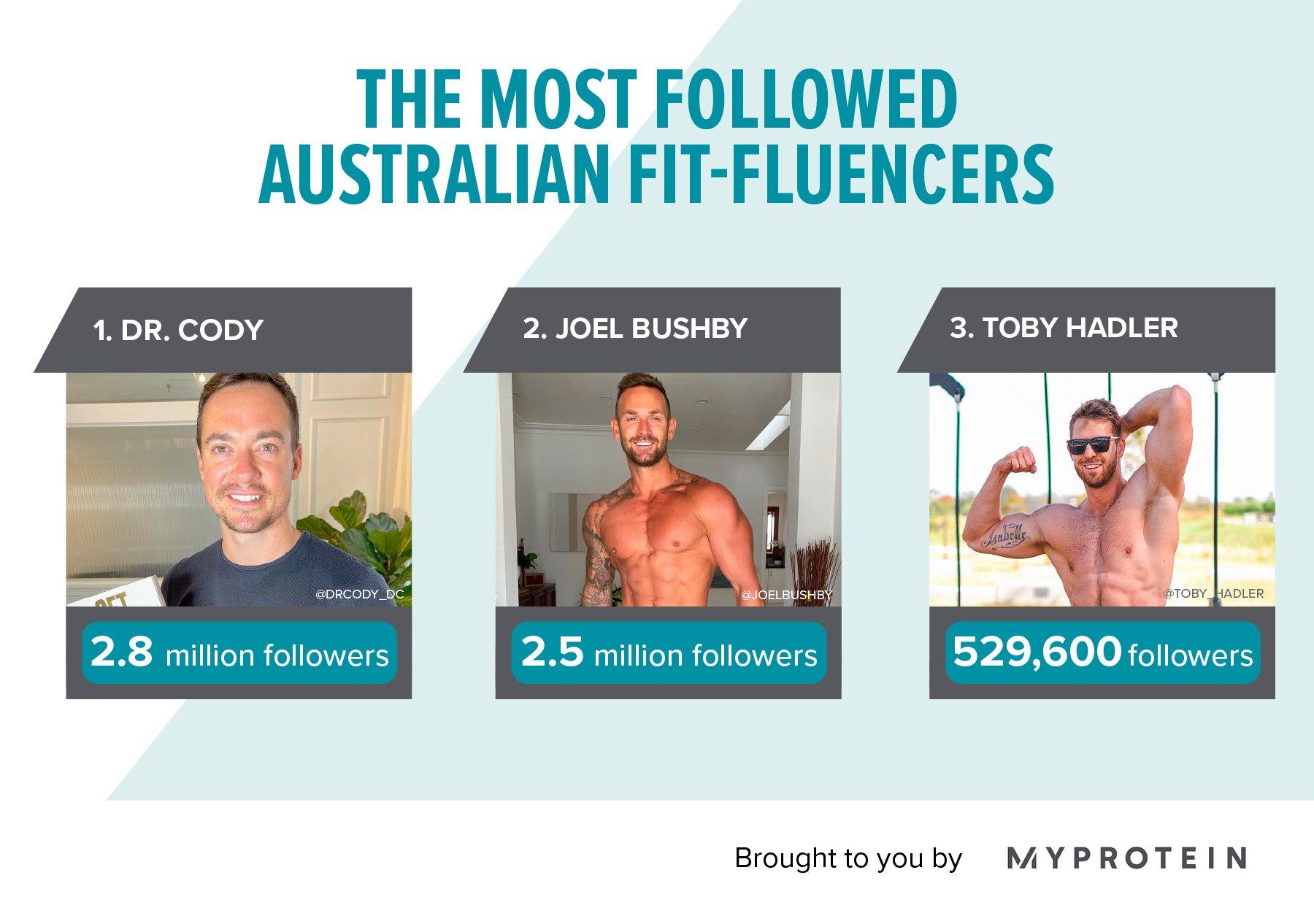 The most followed Australian fit-fluencer is Dr Cody with 2.8 million followers. Dr Cody releases videos based on his work as a sports massage therapist. As sports massages are becoming increasingly accepted as a vital treatment to maintain peak physical fitness, it is unsurprising that Dr Cody’s videos are very popular.

The second most followed Australian fit-fluencer on TikTok is Joel Bushby, the body building fitness instructor often posts workout videos on the beach or by the pool, showing that he has diving skills as well as body building.

Despite having almost two million fewer followers than Joel Bushby, fellow bodybuilder Toby Hadler is the third most followed fit-fluencer down under. Hadler posts videos mainly to do with weightlifting and showing off his toned physique. 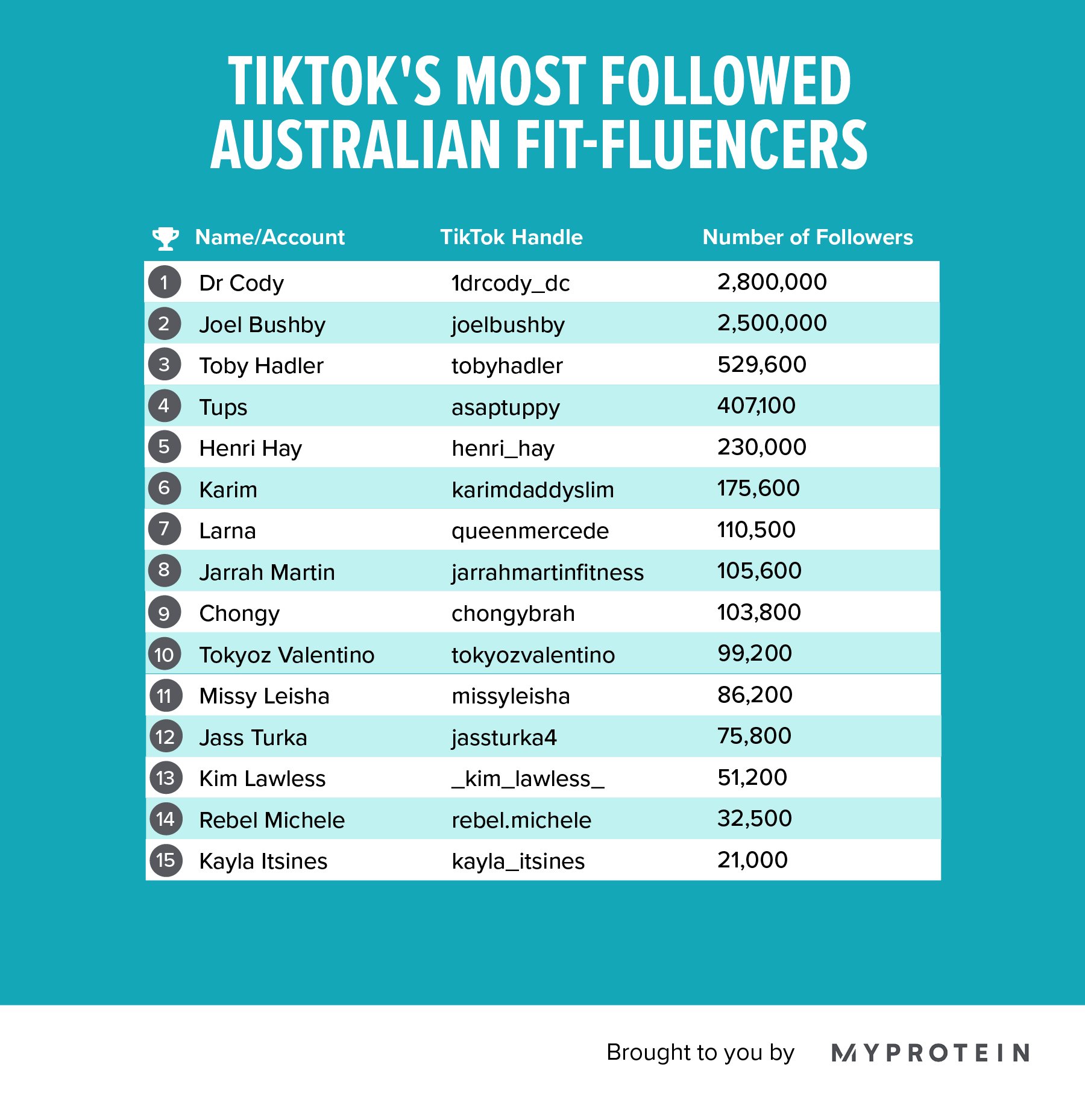 Adele is a keen blogger and yogi with a passion for the vegan lifestyle. She loves exploring new (sometimes weird) foods, cooking & testing new recipes, and always appreciates a good sourdough.

Miss Your Routine? Here’s How To Regain A Sense Of Normalcy

Does Your Step Count Really Matter?

Man Tests If 5AM Starts Actually Improve His Productivity