What are the best alternative sports to get us in shape?

With many gyms worldwide being forced to close due to coronavirus restrictions, many of us have had to think of new ways to keep fit. While running or cycling may be the go-to for many, there are actually so many different and great ways to stay healthy.

To look further than the typical ways of exercising, we’ve created the Alternative Sport Index to reveal the sports which burn the most calories per hour, which muscle groups are worked for each and where these exercises are most loved in the world!

As part of the Index, we have also revealed every country’s favourite alternative sports, by analysing annual search volumes for the most populated countries around the world.

The Most Popular Alternative Sports in Australia

Fencing is the most popular alternative sport in Australia with annual searches of 156,000. Table tennis comes in second with 96,000 searches and BMX takes third place with 94,800 annual searches. 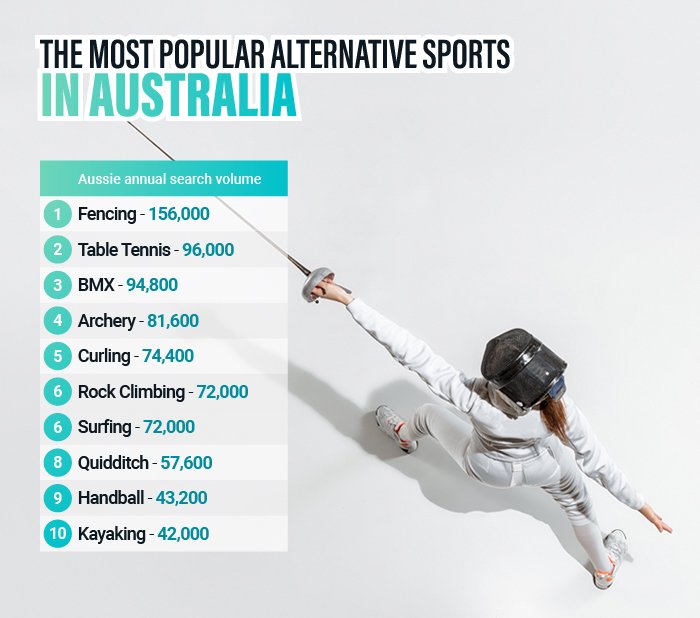 The Most Popular Alternative Sports Across the World.

Looking at which sportspeople search online for the most, we are able to reveal the most popular alternative sports around the world. 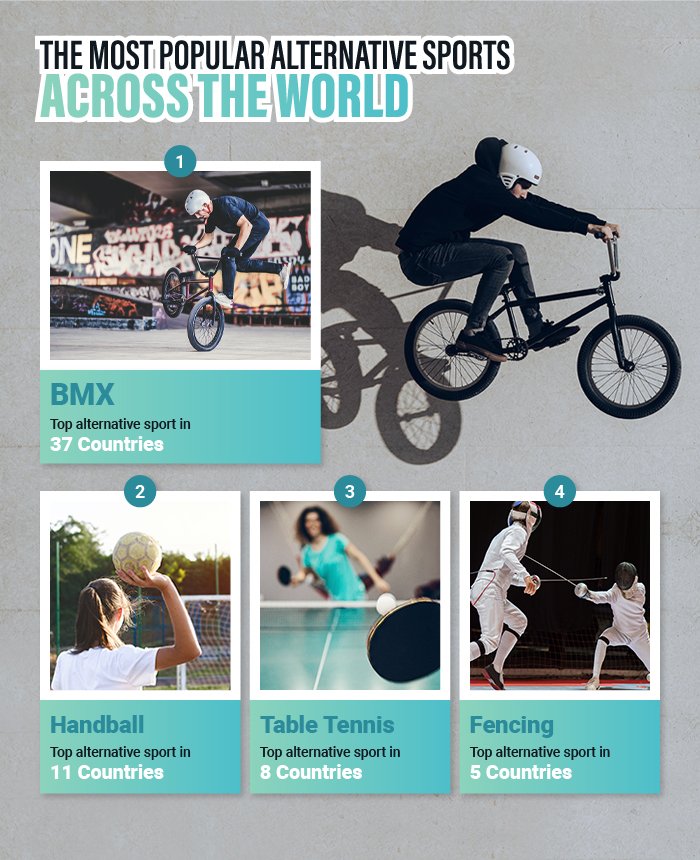 BMX takes the top spot in 37 countries across the world as the favourite alternative sport.

Some of the countries included are Brazil and Spain which both had 34,000 searches, Poland with 31,000 searches and Mexico with 27,00 searches.

BMX, an abbreviation for bike motocross, is a cycling sport performed on BMX bikes. It is either done as competitive racing or freestyle and can be completed on or off road.

BMX burns on average 432 calories per hour for a 150lb person.

Handball takes second place for alternative sports, coming out as favorite in 11 countries. Some of the countries included are Germany with 79,000 searches, France with 71,000 searches and Argentina with 22,000 searches.

Handball is a team sport with seven players on each team, where the team passes a ball between each other, using their hands with the aim of throwing it into the other team’s goal. Handball, on average, burns 573 calories per hour for a 150lb person.

In third place is table tennis with eight countries searching the most for this sport. Some of the countries included are India with 21,000 searches, the Philippines with 10,000 and Pakistan with 2,900 searches.

Table tennis is a sport in which two or four players hit a lightweight ball back and forth across a table using small paddles. The sport burns 286 calories per hour for a 150lb person, on average.

Fencing comes in fourth place with five countries searching the most for this sport. Some of the countries included are the USA with 85,000 fencing searches, the United Kingdom with 47,000 searches, and in Australia, there are 13,000 searches.

Fencing is a sport that involves two opponents who aim to win points that are scored through the weapon’s contact with an opponent.In modern-day fencing there are three types: foil, épée, and saber and a person will generally specialise in one. Fencing, on average, burns 400 calories per hour for a 150lb person. 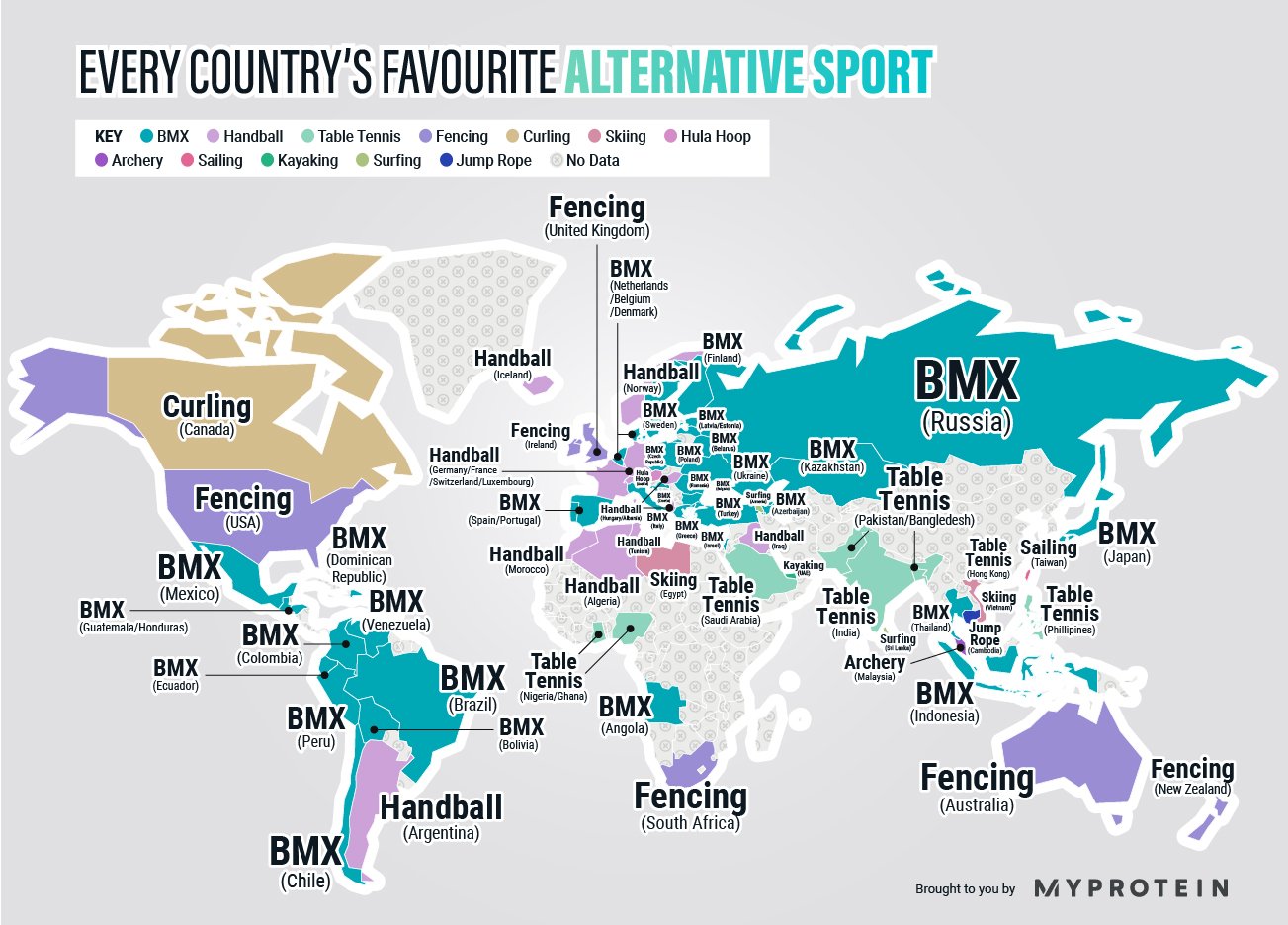 The Top 10 Alternative Sports That Burn the Most Calories

Using Captain Calculator we are able to calculate the total number of calories burnt in an hour for a 150lb person.

Although calories can be a good indicator of the intensity of a workout, there are also other factors to take into account including enjoyment, muscle growth, toning and cardiovascular benefits. 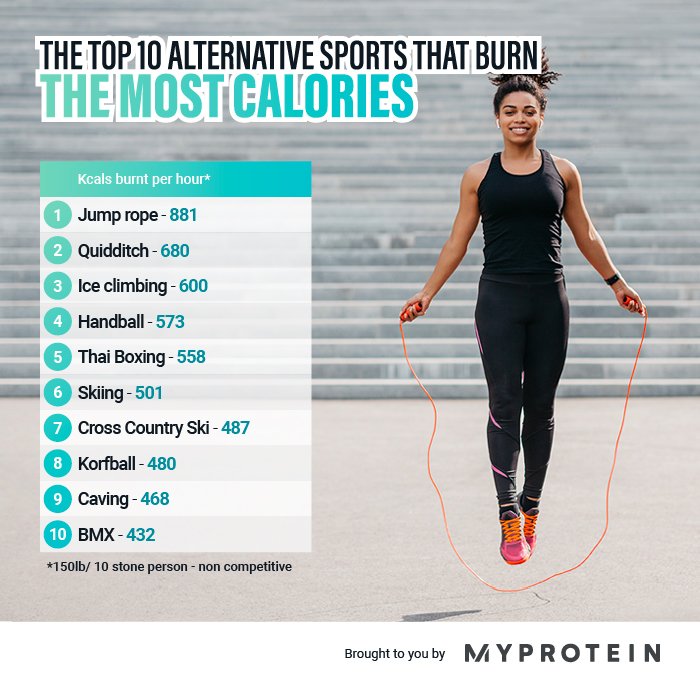 Taking first place, burning 881 calories per hour for a 150lb person is jump rope. Who would have thought a sport we used to play for fun as kids would be so effective at burning those calories?

The full-body workout is great for your core, as well as your upper body. Working out a whole host of muscles that include the gastrocnemius, quadriceps, hamstrings, glutes, abdominals, forearms, and deltoids.

Dating back to as early as the ancient Egyptians and the aborigines of Australia, vines in the jungles were combined with jumping to create jump roping. However, jump rope became increasingly popular in the 1940s & ‘50s as a means of play for inner-city children.

In 2018 Hijiki Ikuyama from Japan broke the world record for most skips over a rope in 24 hours after hitting an astonishing count of 151,409 skips!

The sport that originated from the Harry Potter series, yes that’s right, the sport played on broomsticks, has been adapted for muggle kind.

Burning a massive 680 calories per hour, Quidditch is played on a hockey size field, with two teams of seven players, consisting of three chasers, two beaters, one seeker and one keeper.

In order to score points, chasers or keepers must get the quaffle, (a slightly deflated volleyball) into one of three of the opposing hoops, which scores 10 points.

To stop the quaffle from advancing down the pitch, chasers and keepers are able to tackle opposing chasers and keepers at the same time as beaters using their bludgers (dodgeballs) to take out opposing players. The game is concluded once the snitch is caught by one of the seekers, awarding that team 30 points.

It is a great full-body workout and ideal for working out your core as you must maintain your balance with your broomstick. Your quads will also be getting a good workout to keep yourself on your broomsticks, while your biceps and triceps would be used to steer and stabilize whilst hitting the ball.

Quidditch was founded in Middlebury, Vermont in 2005, there are now over 450 teams worldwide.

Burning around 600 calories per hour, this full-body workout is great for strength training, core work, upper body and legs. Ice climbing movement uses the calf muscles extensively, the shoulder muscles, the triceps, and the forearms to keep your axes in the ice.

Some great places to go climbing are Yosemite, California, the peaks of Kosciuszko National Park, Australia and Kandersteg, Switzerland.

Burning on average 573 calories per hour, it is a great cardiovascular workout, and a fun team building activity to get fit. The push part of Handball is powered by your shoulders, your triceps, your pecs, and core muscles, and all must be used in tandem to ensure a really solid
throw.

The current world champion of handball is Denmark, who won their second title in Egypt in 2021.

Thai boxing is a popular sport that is a combination of martial arts and combat sport and is the national sport of Thailand.

This sport is also a great workout for your core, arms, shoulders, legs and back muscles, as it targets your outer core, spinal erectors, glute complex, quadratus lumborum, and hip flexors.

Burning on average 573 calories per hour, this HIIT workout is a great way to get in shape. As of 2020, there are more than 3,800 Thai boxing gyms worldwide!

Using skis to glide downhill on snow, skiing is a great way to get fit, using your core, legs and glutes to move along on your skis, burns on average 501 calories. The muscles predominantly used in skiing are the hamstrings, quadriceps, calves, hips and even the
muscles in the feet!

Some of the best places in the world to ski include Whistler Blackcomb in Canada, Chamonix in France, Aspen in the USA and Kaprun, Austria.

The number one ski team in the world as of 2020 is Switzerland.

Cross-country skiing is where skiers rely on their own locomotion to move across snowcovered terrain.

Burning on average 487 calories per hour, it is a great way to engage your whole back, legs and arms, as you are physically moving yourself forward across snowy terrain. This full body workout works out a whole host of muscles including your back, biceps, triceps, pectorals, abdominals, obliques, quads, hamstrings, gluteal, calf muscles, leg abductors, and adductors – phew!

Some great places to go cross skiing include, Vernon in Canada, Münster in Switzerland and Åre, Sweden.

Similar to netball and basketball, korfball is played with eight players on two teams of four women and four men who compete to score points by shooting the ball through a net-less basket. The difference between korfball and netball is that you switch from being a defender to an attacker every two goals scored.

Working out your triceps, biceps, quads, abdominals and back muscles, Korfball is a great team sport that also gets your heart pumping, which is also great for your cardiovascular health, not to mention the buzz you get from a win!

The sport, which was invented by a Dutch teacher, burns on average 480 calories per hour. Korfball is great for building endurance and improves balance and coordination.

Caving is not something you would want to try if you are claustrophobic, but caving is a brilliant sport to explore a world of labyrinths of tunnels.

Burning 468 calories per hour, this sport is a great way to get in shape. Working out your shoulders, quads, abs, triceps, biceps, abdominals and calf muscles, caving is great for building stamina and flexibility, not to mention the great upper body strength it builds pulling yourself through small spaces!

The largest cave in the world is in Son Doong in Vietnam at 38.5 million cubic meters.

BMX is a really fun sport that challenges the cyclist to perform moves and jumps that they must land, similar to that of skateboarding. This sport was originally designed for children in 1970’s America as a stepping stone into motocross racing.

Giving your glutes, hamstrings, calves, hip flexors, abdominals, biceps and triceps a real workout, BMX is also a really great competitive sport, perfect for all adrenaline junkies out there.

Burning on average 432 calories per hour, BMX is a great way to keep fit.
—

We calculated the number of calories burnt per hour for a 150lb person using Captain Calculator to create a ranking of alternative sports to see which sports are best to burn calories without the use of a gym. Using Ahrefs we are able to see the full Google search data for Australia and the rest of the world to reveal the top sports across the world

Are You Getting Enough Zinc? | 8 Food Sources of Zinc