Back in 2019 the International Boxing Association lifted a ban on religious clothing being worn inside the ring. This decision is something that Safiyyah Syeed, also known as The Hijabi Boxer, took as her opportunity to get in the ring.

In honour of our combat specific range Engage launching in its second iteration this week, our friends over at MP Clothing chatted to Saf about the moment she decided to take up boxing, what keeps her motivated even through the challenges and what’s next for The Hijabi Boxer.

“I find something I love I’ll stick with it”

Bradford-born Safiyyah became the first woman to enter a boxing ring wearing their hijab after undertaking the sport as a way of recovering both from long-term illness and her eating disorder.

“I used to have a long-term illness, I was ill for two and a half years and basically made a pact to myself by writing list of things I was going to do once I got better, and boxing was on that list.

After my illness came an eating disorder, and boxing was the thing that helped me get through both. I have done loads on the list so far, graduating from two apprenticeships, working in IT, retail and one of the most inspiring things was working in a nursing home, which was the best thing I ever did.”

Saf’s work with the residents of the nursing home gave her the inspiration to put everything she had into her boxing career.

“One thing I learnt from the older people I used to talk with was to live life with no regrets, and that’s why I went through that list. I had the mindset of doing five or six different things and if I find something I love I’ll stick with it.” 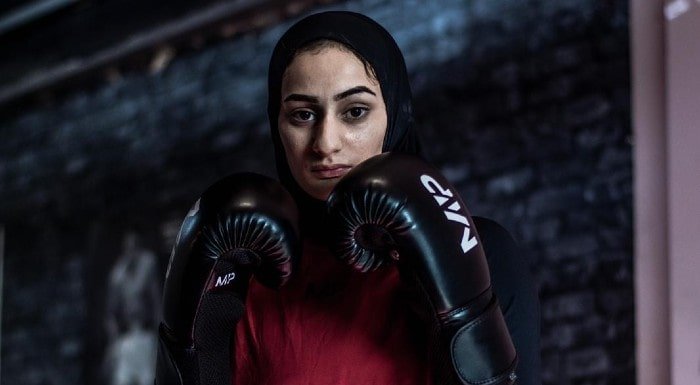 “If you’re not mentally there, you are not going to win”

It’s all about mindset for Saf. She doesn’t have family or friends cheering her on from outside the ring, so it all has to come from within.

“You know what, my mind is different. Everyday I’m surrounded by people in the gym whose parents watch every session, people are pushing them or they’re doing it because their brother or cousins are boxing. No one’s pushing me on, no one’s watching me, so it’s different because it’s personal. When I get in the ring it’s a mindset game honestly. I was speaking to my coach about how you could be physically 100%, but if you’re not mentally there, you are not going to win.”

“It makes me hungry when people doubt me”

Being a pioneer for Hijabi women in boxing, Saf has received some incredible words of support, but unfortunately has also been met with hostility. Something that has been both her biggest challenge and her biggest motivator.

“Obviously being a female boxer in a hijab from the Asian community is very rare, I either get 100% support or people asking me what am I doing. At the start I had many doubters, but it made me stronger, it makes me hungry when people doubt me. Now some of the same people pretend to know me or give support, first they laughed now they support me.”

When MP asked Saf what advice she would give to anyone considering taking up boxing, her advice was plain and simple.

“Go for it, don’t think about it. The feeling after is amazing, pain is temporary. You’ll leave the gym thinking ‘WOW, I was dying during that session but feel AMAZING now’. It’s weird, in life whenever there’s pain or stress usually, you’re like ‘forget this’, but with boxing you almost want more pain, it’s strange.”

“I want to change the world of boxing”

Saf has big ambitions for the next few years of her career, and it looks like nothing is going to get in her way.

“Hopefully I’ll have a few medals! But really, I want to change the world of boxing. The medals and belts will come, but I want to enjoy the process, give myself a pat on the back and appreciate what I’ve done. The goal is to change the game and build my brand. I just want to level up. My legacy is the most important thing to me, I want to be a positive for the Asian community, I can’t change the negatives, but I can still make a positive impact.”

“I’m able to cover up yet still feel super comfortable”

The new Engage range is designed to keep you cool and comfortable so you can take on just about anything. Here’s what Saf had to say about how Engage benefits her training.

“To be honest I never used to go out of my way to buy MP, however since I’ve started wearing it for training, I realised it’s amazing. I’ve had people asking me about the range and I’ve even taken it to training camps.

What I love about MP is their broad range other brands simply don’t have. Other brands have nice stuff but it’s always skin-tight and often revealing. I’m fighting at the end of the month, and I need something to put under my vest to cover up with, so I got a long sleeve MP top for that because it’s perfect.

Obviously, I need to be modest in my clothing, and that’s why I love MP, I’m able to cover up yet still feel super comfortable. Even when I’m not training, I wear it. You also don’t have to be spending as much money as you do with other gym wear brands which is a big plus!”

Saf is changing the game in boxing. Inspiring so many other young Muslim women to get involved in sport regardless of whether they cover or not, Saf’s role in the sporting world is invaluable.

Her ambition to keep pushing boundaries and changing perceptions as well as taking medals is incredible, and we’re excited to give her the tools to help her make it to the top.

Browse our Engage range now to get Saf’s look. And check out MP’s Instagram page to stay up to date on the latest launches.

Does Creatine Really Make You Fat?

Can You Take On This 30-Day Plank Challenge?

Why Carbs Aren’t The Enemy | Different Types of Carbohydrates & Benefits