Listening to music during training could give you that much-needed boost for those last few reps. In fact, a study from Applying Music in Exercise and Sport argues that tempo and lyrics can actually affect your performance by altering your mind set or distracting you from discomfort.1

So, we’ve run the numbers on your favourite training playlists to find the tracks that make you tick.

With help from Sort Your Music, we analysed over 100 workout playlists across different workout types and genres.2 Pulling out the stats on BPM, energy, danceability, loudness, mood, and popularity, we’ve created the ultimate workout playlists based on our models and your favourite genres.

Here are our top findings:

Discover the perfect training playlists for you by trying our quiz:

This category includes all types of exercise, whether it’s cardio, weightlifting, or an all-rounder gym session.

You won’t be surprised to find old favourites in here. From Rihanna to Kanye and Tiësto to Linkin Park, our general workout models included some well-known hits. With tracks like POWER and American Idiot, they’re universal no matter how you’re training.

The most common artist for all workout playlists was Tiësto, who appeared 112 times in 100 playlists. Tiësto also performed as the most familiar artist in general workout EDM, cardio no genre & cardio EDM.

Our model track for your workout is Don’t Waste My Time by Krept & Konan. This track featured on Ryan Coogler’s Creed, where “Pretty” Ricky Conlan (played by former Cruiserweight Champion, Tony Bellew) walked out to the motivating track in the final scene. What boxing walkout song isn’t motivational, right? 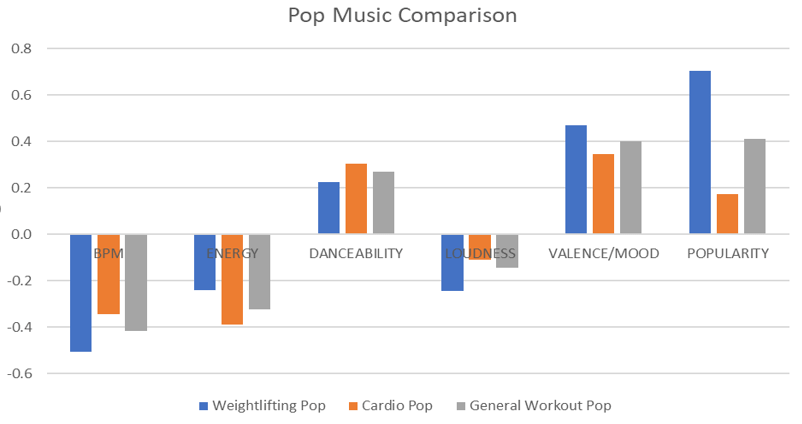 Beyoncé is behind our most common pop workout song with  Run the World (Girls). This track makes an appearance in 60% of the playlists in this category.

The most common artist for a general workout pop playlist is Rihanna. In ten playlists, Rihanna appeared 29 different times.

Based on our analysis, the surprise model track is Starships by Nicki Minaj. The song has an upbeat tempo, with a steady rhythm that’s sure to get you through any workout.

Appearing in an overwhelming 80% of the playlists in this category, the most popular song for General Workout: Rock playlists was American Idiot by Green Day, which appeared in 80% of playlists.

The most common artist for general workout rock was Linkin Park. They managed to appear 43 times in ten rock workout playlists.

Our model track for you is Paradise City by Guns N’ Roses. We’re not too surprised to see this classic from rock pedigree Guns N’ Roses come out as our perfect rock anthem. With a repetition of bass and snare, this track maintains the kind of steady rhythm that you can bring out for any kind of training.

Our model track for you is Cold Water (feat. Justin Bieber) by Major Lazer. This hit is a great one to include in an amped-up workout playlist. It came out in our analysis matching the high energy score of a model EDM track.

Our model track for you is V.3005 by Childish Gambino. This track has a fantastic bass and snare rhythm that’s continues throughout the song. This consistency makes it perfect for a workout track, with a tempo that has you moving in time with the record.

Get your blood pumping with our model tracks pulled from your favourite cardio-focused playlists. The average tempo for this type of workout is a little quicker than your more general training track, between 120-140 BPM, so you’ll be working hard to keep up.

The most common artist on cardio playlists is Tiësto. He appeared 93 times in all the cardio playlists that we analysed. Along with the Dutch DJ, artists like Rihanna, Eminem, and The Foo Fighters are all well-represented here.

As well as artists like these, hits like HUMBLE. by Kendrick Lamar and Heroes by Alesso, both appear as popular choices for cardio playlists. Whether you’re in the gym on the treadmill, stepping machine, stationary cycle or out in the elements, we’ve got your training covered.

The most common artist in Cardio: No Preferred Genre playlists was Tiësto, who appeared 93 times. From Ritual to God Is A Dancer, you’ll always see some Tiësto in workout playlists. If you’re struggling to push yourself to the max, this guy can help!

The most common song in Cardio: No Preferred Genre is non-other than Kanye West’s Stronger, which appeared in 100% of cardio no preferred genre playlists. Stronger is an excellent choice for your cardio playlist as the lyrics “Harder Better Faster Stronger,” are all the motivation you need to push yourself further.

Our model track for you is Ocean Drive by Duke Dumont. This track has an upbeat, energetic vibe that is perfect for your cardio workout. With a steady rhythm, this track is ideal to set the flow for your chosen cardio exercise.

Beyoncé features with the most popular song in Cardio: Pop playlists with Run the World (Girls). The track appeared in 50% of pop workout playlists.

The most common artist for the Cardio: Pop set was Rihanna, who appeared 26 times. Rihanna also made the most appearances in general workout pop playlist.

Our model track for you is Wild Ones (feat. Sia) by Flo Rida. At 130 BPM, this track is a great pacesetter. With high energy and valence/mood, this track should also be kicking up the endorphins. 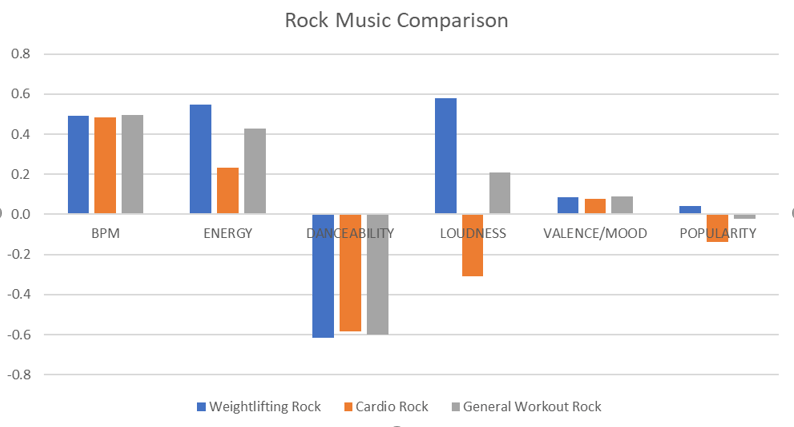 There was no individual “most common song” for this playlist. Instead, we had a tie for number of appearances between American Idiot by Green Day and Another One Bites The Dust by Queen. Both appeared in 40% of Cardio: Rock playlists.

The most common artist in Cardio: Rock playlists were Foo Fighters, who had 21 tracks in ten cardio rock playlists.

Our model track for you is Bark At The Moon by Ozzy Osbourne. One of the legends in the rock game, Ozzy’s song is a great choice to help push you through your workout. With an incredibly high energy level, this track will keep you switched on and powering through your workout.

Just like our overall EDM playlist review, the most popular song amongst our Cardio: EDM playlists was Heroes (we could be) by Alesso ft. Tove Lo. This track was so popular it appeared in 80% of playlists in this category.

Believe it or not, Heroes (we could be) by Alesso ft. Tove Lo comes out as our model Cardio: EDM track. With a BPM of 126, this track matches the average for the category. Alesso uses the soft sound of a guitar in the background, which is perfectly calming for a cardio workout. With a catchy chorus, you’ll be singing this whilst enduring your cardio workout! 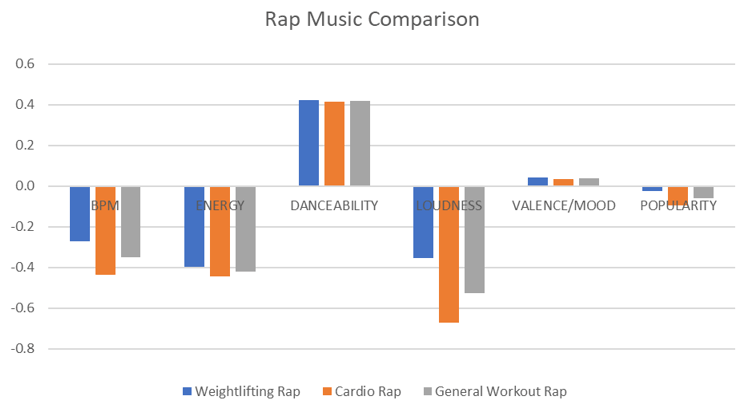 The most popular song for Cardio: Rap was HUMBLE. by Kendrick Lamar. It appeared in 60% of Cardio: Rap playlists. The appeal is obvious: during this track, Kendrick Lamar challenges his fellow rap artists to sit down, be humbler, and respect his position as one of the greatest in the genre.

The most common artist was none other than Eminem. He appeared 43 times in all Cardio: Rap playlists. Eminem has some of the most motivational tracks we’ve come across: Till I Collapse and Lose Yourself, which are both commonly found in workout/motivational playlists.

Our model track for you is Stronger by Kanye West. Stronger is a perfect workout track. The mantra “Harder Better Faster Stronger” is a good one to bear in mind as you push even harder to achieve their goals.

Three Days Grace, Eminem, Kanye, and Zedd are all artists that appear in our weightlifting playlists. If you enjoy an upbeat, motivational weightlifting session, we’ve devised the perfect playlists for you. Enjoy songs like Ritual, POWER, and a hand pick of the popular tracks on these playlists.

No matter what routine you’re following our playlists have everything you need to motivate you through those sets and become a staple in your training ritual. 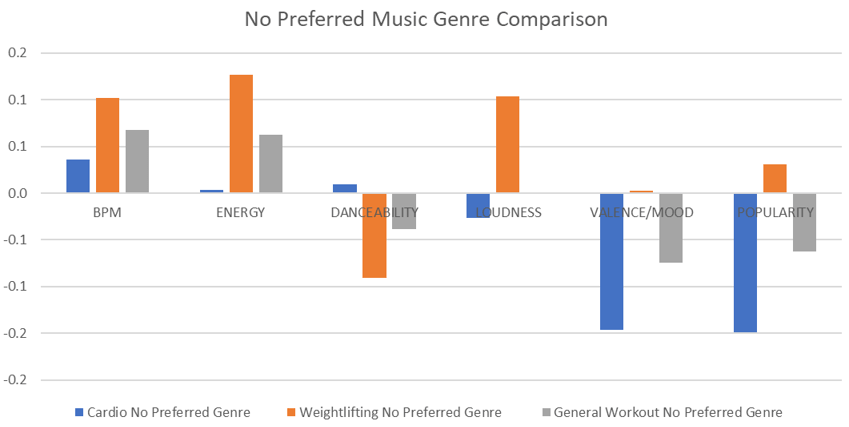 Both the most popular song & the most familiar artist for Weightlifting: No Preferred Genre was Eminem. He appeared 93 times in our weightlifting set. As well as this, his hit, Till I Collapse was the most common track which appeared in every single weightlifting playlist.

It’s a track made to push you to the limits, showing that you cannot give up, find the motivation you need within yourself, and remember why you started.

The most common artist in Weightlifting: Pop playlist is Eminem, who appeared 26 times in the ten weightlifting pop playlists we reviewed. The Missouri born rapper has migrated into the pop world with tracks like Love The Way You Lie and features from pop artists like Rihanna and more recently, Ed Sheeran. We crave the emotion and passion in his tracks, making him perfect for a motivational workout playlist.

The most popular song in weightlifting pop playlists is Gwen Stefani’s classic Hollaback Girl, which appeared in 30% of the playlists.

Our model track for you is Fancy by Iggy Azalea. With high energy levels of 72, you’ll be surprised by how the bass-heavy synth rhythm of this earworm can push you through your toughest workout sets.

Our model track for you is Jungle by X Ambassadors. With a steady bass and snare throughout the record, Jungle is an excellent addition to your weightlifting playlist. It’s a track that keeps you calm and consistent – essential for those gruelling routines.

The most popular song and artist in Weightlifting: Rap playlists are Kanye West and his popular track POWER. We’ve seen POWER come out on top across multiple categories, but we can’t deny that it also seems like a perfect weightlifting track. Kanye’s track features in 80% of weightlifting rap playlists, which proves Kanye is an unavoidable figure when it comes to training anthems. He alone features a massive 69 times in weightlifting pop playlists, making him appear on average, six different times in each playlist.

Our model track for you: Alright by Kendrick Lamar. With a high level of energy, this track is great to keep you pumping those weights. The record has also got a great valence/mood score to ensure that you stay motivated during your pump. 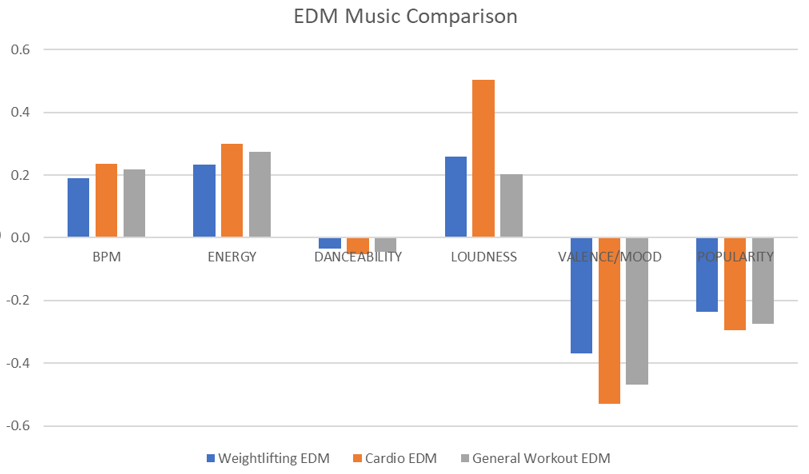 Our model track for you is Chasing Summers by Tiesto. The fast drum and bass rhythm will get you in the zone to tackle heavy volumes consistently.

At the start of the year, your votes made Billie Eilish the first solo female act to win Triple J’s Hottest 100 of 2019. From this, we decided to find the best and the worst workout track from the top 100, and the results didn’t let us down.
The best workout track was Lose Control by MEDUZA. This song actually finished 88th in the top 100, although it takes our first place. The deep-house track builds up to a consistent base-snare beat in the chorus. This should definitely be on your workout playlist.
The worst workout track was Welcome To The Black Parade (Like A Version) by Alex Lahey. This song finished 83rd in the top 100. The track is slow and unpredictable, making it an awkward song when trying to keep a workout rhythm.

From cheesey POP to some serious Rock, we’ve created a playlist for every mood and workout, so pack your headphones and press play on your best workout yet. Whether you’re following a setting off on a new routine or looking for a new element to incorporate into your fitness rituals we hope these track can push your performance to the limit.

8 Top Supplements For Runners To Pick Up The Pace

Sport Psychologist Explains How To Make A Pledge & Stick To It