Mental Health month is here, and we want to celebrate the impact fitness can have on mental wellbeing. The best way to do that, is by hearing real stories of people who have struggled with their mental health, and come out the other side. This is Tom Armstrong’s story.

Tom was brought up on rugby.

Born in Liverpool but moving to the rugby-loving town of St Helens when he was 5, Tom was encouraged to get into the sport straight away and took to it immediately. From playing as a kid, Tom then went on to play rugby at academy level, and eventually turned pro. So, when overnight he went from a promising rugby career to one derailed by injury, understandably his mental health took a hit.

Compounding the challenges he faced, Tom’s wife also was diagnosed with cancer around the same time as his injury, and his first child, Atlas, was born. Drug and alcohol abuse became unhealthy coping mechanisms.  He was at a total loss with what to do next.

After reaching what he describes as “rock bottom”, Tom embraced healthy coping mechanisms like meditation and rediscovered the power of fitness for mental health. Now, Tom has run an ultramarathon, a triathlon, built his own business from the ground up and has recently moved into a new home with his wife and son.

This is how Tom got there. 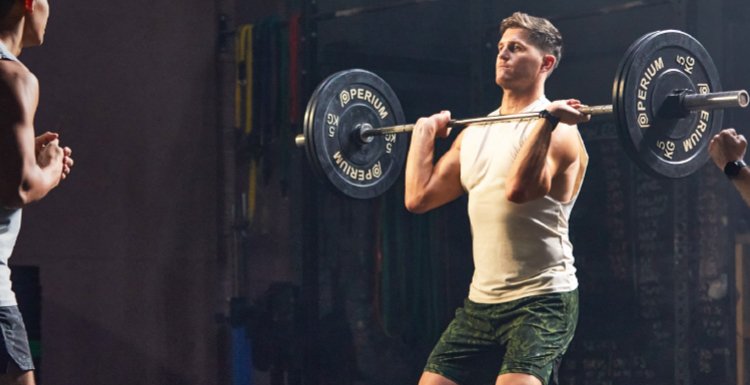 Sportspeople often suffer injuries; it’s the nature of the job. But ‘career-ending’ are words every athlete dreads to hear.

At 28 Tom suffered a hip injury due to genetically irregular shaped femoral heads which caused him pain. To get him back on the pitch quicker, Tom was encouraged to go for an operation on his hip, explaining “I went into this operation thinking it was going to be fine, but you’ve actually only got a 10-20% chance of recovery”. 12 weeks later Tom felt something wrong in his hip and says he “knew that was the end of the road”. Nine months after, Tom was forced into early retirement from competitive rugby.

The most heart-breaking bit for Tom was that his injury could have been fixed with physiotherapy, it was the operation that was intended to get him back playing quicker that sent him into retirement.

With little job experience, Tom’s options were slim. All while caring for a new-born and his wife.

Then, 2020 hit and with it came the pandemic. Tom didn’t qualify for furlough during the pandemic as just before he’d invested in setting up his own gym, making him the director of a company. However, the relationship with a business partner ended abruptly, leaving Tom with no help from the government during the pandemic, no work and incredible emotional strain.

“So, my wife was ill, I didn’t get any help from the government and it was just like, what do I do?”. Tom also lives with adult ADHD, a condition that is treated with prescribed amphetamines, something he began to abuse as a way of escaping day-to-day life. He explains “it went from one pill a day, two pills a day, three pills a day”, using his ADHD medication to wake him up and get him through the day, and his leftover medicine from his hip operation to get him to sleep.

From his “rock-bottom moment” came an overwhelming realisation.

“I was up at like 3am with the baby, then I’m going to the fridge to reach for a can. That’s when I thought this has got to stop”.

“This isn’t my life, I shouldn’t be doing this”

After living like this for months, moments like this with his son brought Tom back into reality and began making changes. He quit the pills he was taking completely, and got himself sober.

After dabbling in meditation on and off during his pro career, Tom finally committed to it during his recovery from addiction. He recalls “when I was in a really dark place, still up at 4am because of the amphetamines, I’d just meditate for an hour or an hour and a half instead of ending up at the shop to get a drink”. He says he remembers thinking “I’ll just sit here and try to quiet the voices, and it did, and that’s when it started, I thought this is working”.

Meditation is now a key part of Toms new routine. He wakes up and uses red light therapy during his morning meditations, using four key meditations; “I use breathwork methods, like counting up to 10 and back down, […] box breathing, visualisation of the day, the week or the month and gratitude, thinking about whatever you want to be thankful for”.

Meditation has been so life-changing for Tom that he reckons it would be a revolutionary addition to rugby training plans, as well as other sports; “if that was part of recovery day [meditation] then I think a lot of those stresses and strains would be alleviated”.

Following a hip operation that puts you out of pro sport for good, you wouldn’t expect someone to take on a 10k, never mind a triathlon and certainly not an ultramarathon. But that’s exactly what Tom did.

“The doctors said that by 40 I’d need my hip replacing so I was like no, I’m not going to let that be my fate”, Tom Explains.

Instead, when Tom’s friend, an experienced ultramarathon runner, asked him to join him at his next event, Tom replied “ok, let’s do this”.

He describes the ultramarathon in the same way we describe going for a jog after a few months off; “it wasn’t that bad”. He’d accepted the mental challenges; he’d been through plenty of those before. He even describes the physical challenge of the marathon as not too difficult, despite adding “I got to the last ¾ and my hip just gave way”, completely unphased.

He has to eat healthily, he has to stretch and train properly or, in his words, he’ll look “an absolute fool”. Having a challenge like this on the horizon is Tom’s way of motivating himself to live better, to avoid being trapped at “rock-bottom”. 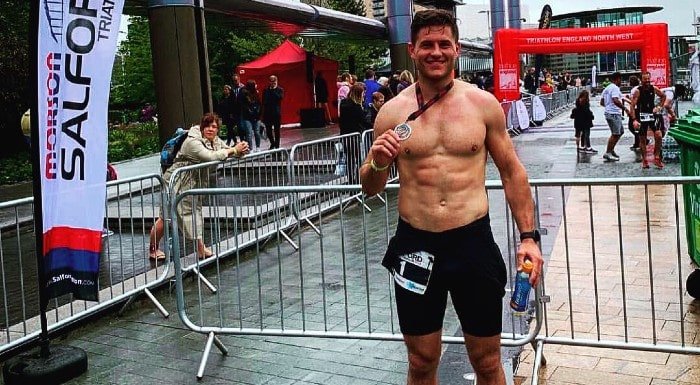 Despite Tom’s ability to help pull himself out of a dark place, he makes clear that that’s not an option for a lot of people.

“I think number one is talk to someone, get yourself a support system. I’ve found I’ve always been good at digging myself out of my own holes, but self-help doesn’t work for everyone”. Find a trusted friend or a family member and tell them what you’re struggling with.

Tom got himself out of the vicious cycle he was in, set new goals for himself (and smashed them) and now runs his own personal training company — treating health and wellbeing holistically.

“I now help men and women, athletes, professionals, misdiagnosed people, and people who are tired of pain and restrictive movement, get their lives back”.

Tom encourages his clients to set goals just like he did as part of their training programme.

“I focus on regaining movement increasing fitness and body composition whist giving clients a goal-oriented programme with a target to hit at the end like a triathlon, a marathon, or even just a 5k”.

Mental challenges come in different forms for everyone, and the treatment isn’t always the same. Tom found balance with meditation and returning to exercise, and while the method may vary for every individual, empowering the body often empowers the mind. But if you are struggling with your mental health, speak to someone you trust and seek professional advice.

Can I Grow My Glutes With A Resistance Band? | Your Questions Answered

The Yoga Edit: Everything You Need To Flow