How Are Our Friends Across The Pond Feeling During ISO?

There’s no escaping the fact that life has changed dramatically over the past couple of months. So, Myprotein decided to research how our health habits have changed.

We commissioned a YouGov survey of over 2,800 Brits, looking into whether people are exercising more, eating more healthily, and what concerns people the most

Many of us now have far more free time than we’re used to, so it’s no surprise that Brits are exercising more. Over a third claim to be now exercising at least once a day, with some actually adding in more workouts weekly.

The graphs below show how often Brits exercise pre- and post-lockdown. There’s a clear shift to daily exercise, with the low workout frequency declining.

Missing The Gym? You’re Not Alone…

With gyms shut nationwide, if you’re suffering from the gym blues, we feel you. 73% of gym-goers miss at least one thing about the gym, whether that be the workout equipment, socialising with friends, or attending gym classes.

However, there are ways to keep on top of your health at home and many of us are searching for alternatives online. In fact, over half of gym-goers are now using tech to keep spirits and motivation up.

Once you’ve dug out that motivation, you might be thinking about what you can work out with. As it turns out, us Brits are pretty creative when it comes to our workouts, but we still occasionally like to rely on the old faithful dumbbells.

In fact, 1 in 10 British gym-goers admit to using ordinary household items to help them workout. While nearly a third own dumbbells or are even lucky enough to have their own cardio machine.

London Most Stressed About Health

Many of us are concerned right now, especially with our health. 56% of Brits have at least one health concern, with our diet suffering being the top worry. The next two major health concerns come as no shock for fitness enthusiasts, losing strength and losing cardio ability. Surprisingly, the older you are, the more likely you are to not be concerned with your health.

Myprotein nutritionist, Jennifer Blow, adds: ‘Being concerned about your diet right now is completely natural. When we’re bored or stressed, people often find themselves reaching for snacks (rather than making something fresh and nutritious). This could be the time to learn how to cook a new dish or get into batch-cooking, so you’re never left wondering what the next meal is and snacking on the first thing you see. Know your cravings and plan your shopping around healthier ingredients and snacks – particularly those that are high in protein or fibre that will keep you feeling fuller for longer, such as nuts, eggs, beans and other pulses.’

Let’s break it down a little into regions. Our top worrier is London — nearly ⅔ of Londoners have a concern — while the North West, East Midlands, and Yorkshire and the Humber are the most relaxed regions in England, with 54% having a concern. The least concerned UK nation is Wales, where only 53% have at least one health concern.

The heat map below highlights which regions are most concerned with their health. It appears the more southern you go, the more likely you are to have at least one concern with your health. 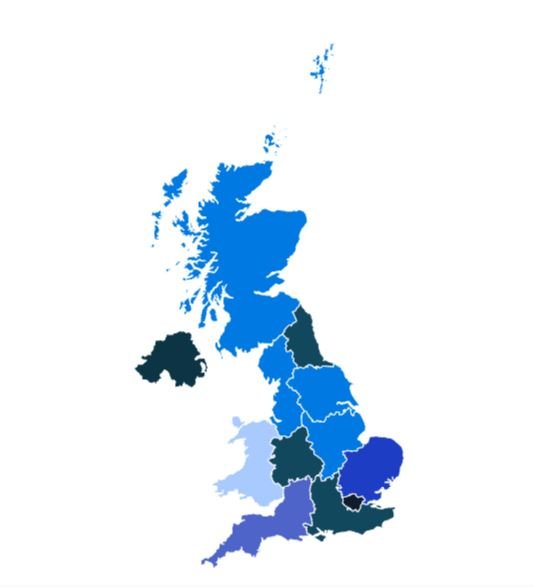 Moving on to sleeping habits, nearly ⅔ of Brits have reported a change in their usual sleeping patterns under lockdown, with over half claiming a negative impact. Not getting enough sleep can have a detrimental effect on your health — besides just feeling exhausted. If you find yourself to be one of these people, try doing a weekly workout as those who exercise more frequent report a better sleep quality.

Splitting the population into age groups, the older generations were more likely to say they haven’t experienced changes to their sleeping habits. Those aged 55 or older came second in saying their sleeping quality is better post-lockdown, with only 22% saying the opposite — the least that any age group reported.

When it comes to supporting our immune health, over 1 in 10 Brits take more supplements now than pre-lockdown to keep their immune system in top condition. Delving deeper into this, 1 in 25 are now taking much more than they used to. This comes at no surprise with the majority of us reporting a concern for our health and wellbeing.

Have you seen changes like this to your health? The current lockdown is affecting many of us in different ways, whether that’s getting a sufficient amount of sleep, exercising frequently, or ensuring you’re on top of your recommended vitamin daily dose. One thing’s for certain, looking after our own health has never been so important.

All figures, unless otherwise stated, are from YouGov Plc. Total sample size was 2843 adults, of which 2766 were GB adults. Fieldwork was undertaken between 20th ‐ 21st April 2020. The survey was carried out online. The figures have been weighted and are representative of all UK adults (aged 18+).

How To Keep Your Family Active During Lockdown

Are any diets no.1 for weight loss? Find out this and more...

Stuck At Home? Here's Some Fitness Inspo For Your Feed

Check out these self-isolation fitness challenges from around the world.