When have you been bold, made a change and what were the results?

In 2010 I broke up with my boyfriend. After suffering from depression I lost my job and no longer felt a part of society. I then made the decision to move. It was scary and I took a big risk to pursue my dream. Being a successful professional wrestler was my ultimate goal. I achieved something I never thought I could.

Why did you begin your fitness journey?

I was always so small and skinny. I got bullied in school and was overlooked in many occasions. I wanted to be strong and confident. I wanted to be a strong fighter. That’s why I started with fitness.

Do you feel the sports industry has gender equality?

I think that just like the colour blue is for boys and pink is for girls, sport is divided into female and male type of sports. Which is silly!  I want to do bodybuilding, have big muscles and fight in a cage, just as some boys love to do ballet or yoga. People should not be judged on their preferences. But things have changed since brave women, including Ronda Rousey and Holly Holmes made female fighting popular, it’s widely accepted that women also fight, train hard, look all sweaty and have muscles. 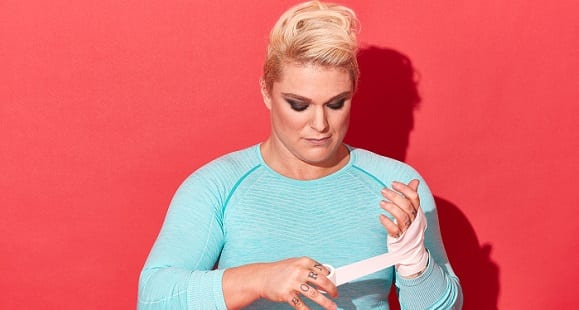 Have you ever felt self-conscious at the gym? How did you deal with it?

I visit many different gyms in many different places and every time I enter a gym, all eyes are on me. I look apart from the society standards and people are curious about who I am and what I am doing. Sometimes, when I have a hard day or I feel tired, I get annoyed of the looks or feel self-conscious. I tend to put a cap on, wear big headphones, making it clear that I don’t want to interact with others. After all, I am there to train, just like them. I turn up the volume and just focus on myself.

Who is your favourite superhero and why?

I love SUPERMAN. I can relate to him the most as I don’t know my real parents. Also, I kind of live a life like Superman. In my daily life, I am jazzy, but when I lace my boots I become the Alpha Female and have super powers. I lift other people over my head and smash them to the ground.

Did anyone or anything, in particular, inspire you to make a difference?

When I was a kid I was desperately searching for someone to look up to. We didn’t have access to the Internet like today. So I created an invincible persona which today is known as the Alpha Female.  A strong, confident, cool woman who wants to inspire others, you can win against the odds. You need to believe in yourself and go for it!

If you could compare yourself to an inspirational woman, who would it be and why?

Angelina Jolie. I love her! I want to be like her. She is a beautiful woman with plenty of class. Helping less fortunate people and spreading awareness. Not ignoring the needs and speaking up for the voiceless.

If you could have one advice/quote for all the women in the world what would it be?

Let’s be united, work together and give this world what it needs: a strong feminine touch!

I love the beauty & beast movie.

It is very important not to judge a book by its cover!

Dwayne Johnson, Will Smith, Tony Robinson and Conor McGregor! All are believers in the law of attraction theory and master it. I want to learn from them

How do you unwind/switch off?

I actually listen to classical music. The sound of a piano makes my soul fly.

Can You Still Build Muscle With Just Bodyweight Training?

What Would Happen To My Body If I Gave Up Caffeine?

What Is Magnesium? | Health Benefits, Side Effects & Supplement Dosage |PART 1

What Is Spirulina? Health Benefits and Side Effects